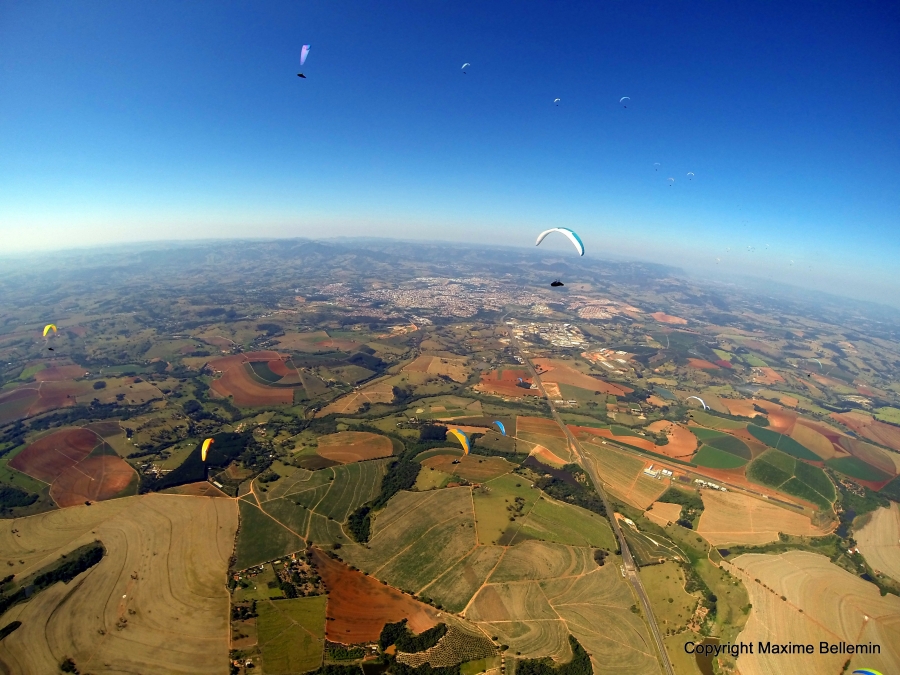 About the first task at the PWC in Brazil

The World Cup is currently taking place in Brazil (pwca.org), in Pico de Gaviao. As is often the case in Brazil, the level is high, the weather is good, and the races deserve a look !


So we decided, with the XC Analytics team, to let the app work for us to see what comes out of the first task. As always in a debrief, there’s a lot to say, so let’s be concise. Let us state, at the outset, that all the information presented here is only the reflection of the data analysed by the application, we have not received any indications from the pilots, and we are obviously not in Brazil !

Subtlety of the World Cup scoring system, the fastest on the course is not necessarily the winner of the task. We will not go into these considerations, for those interested, the rules are available on the PWCA’s website mentioned above. 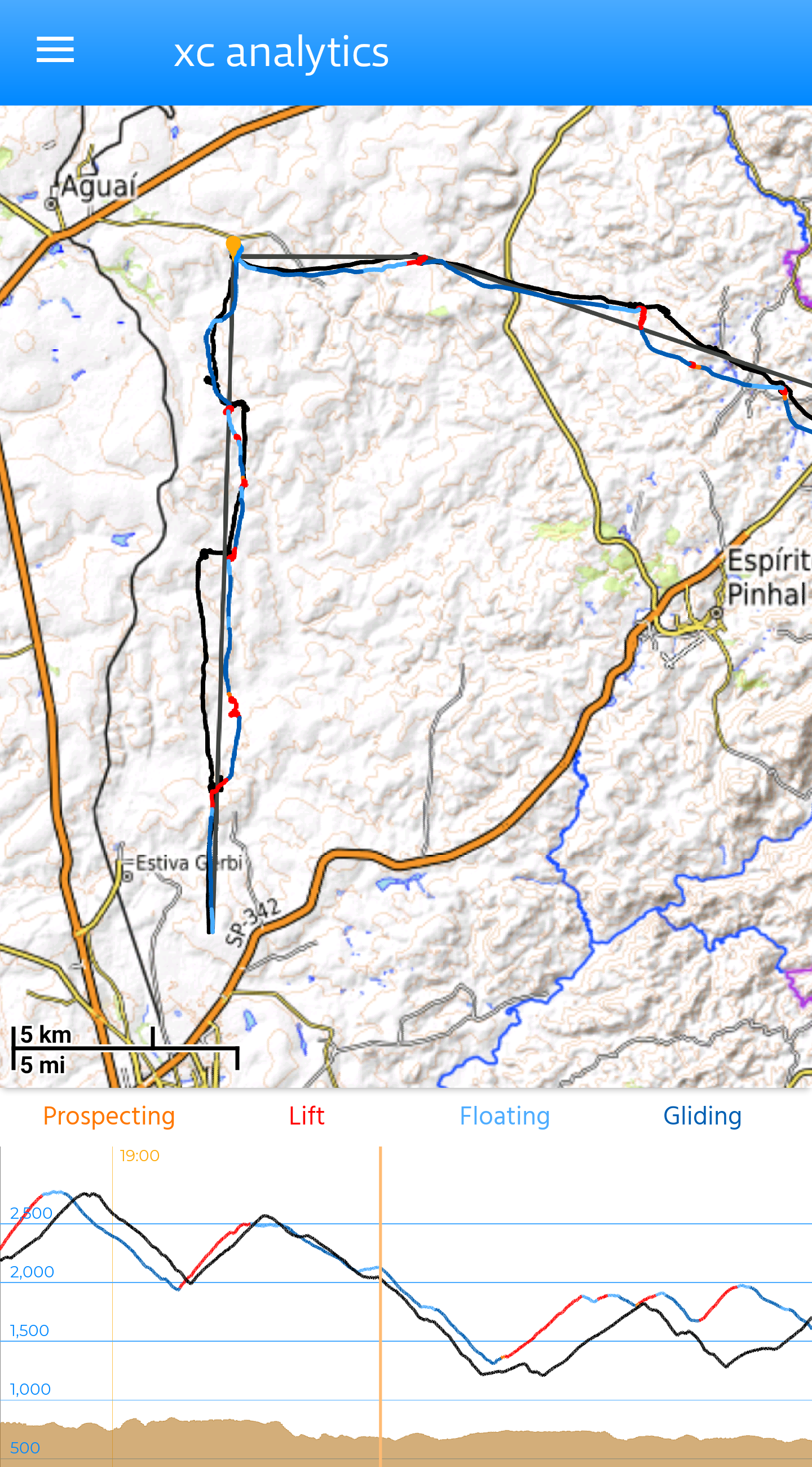 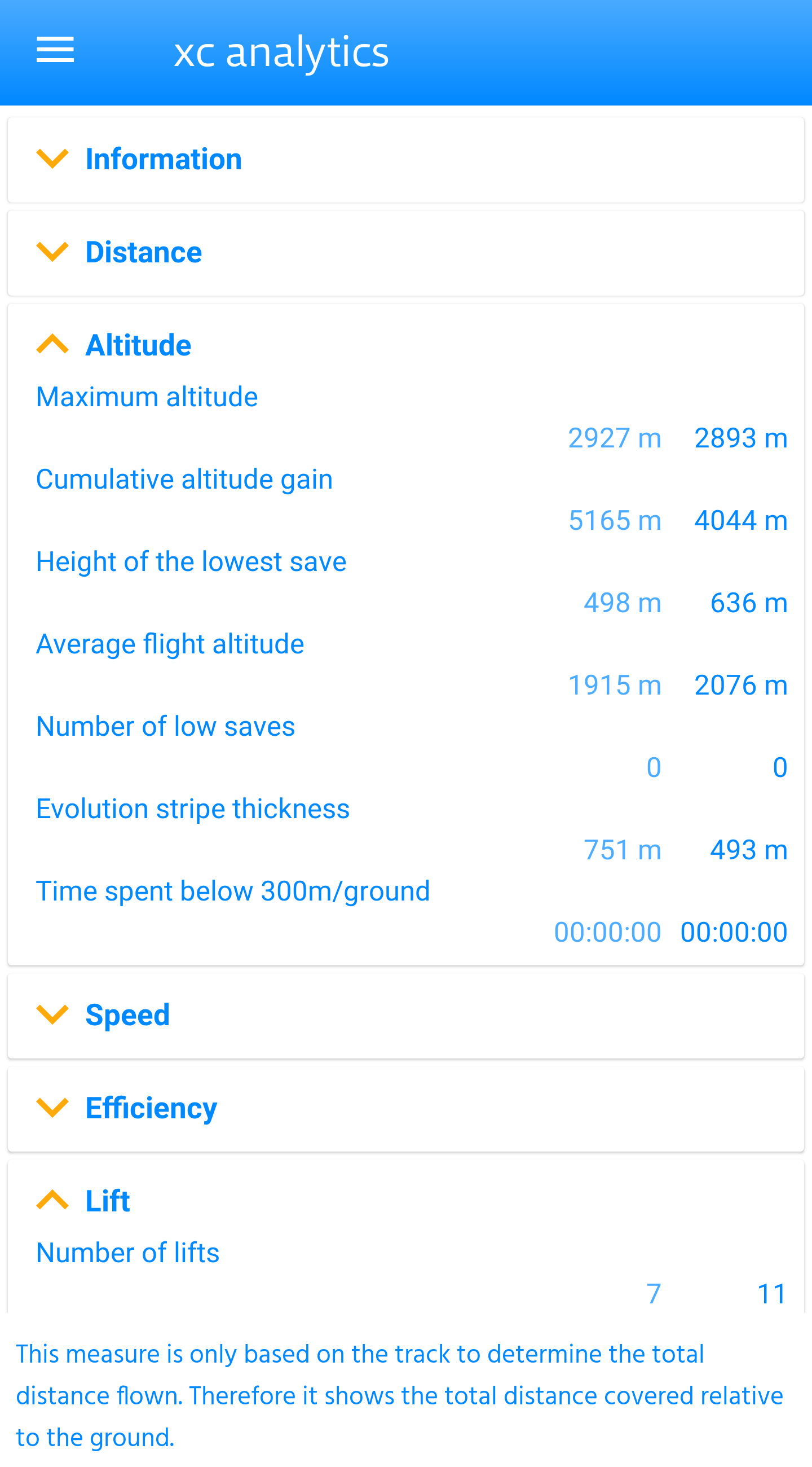 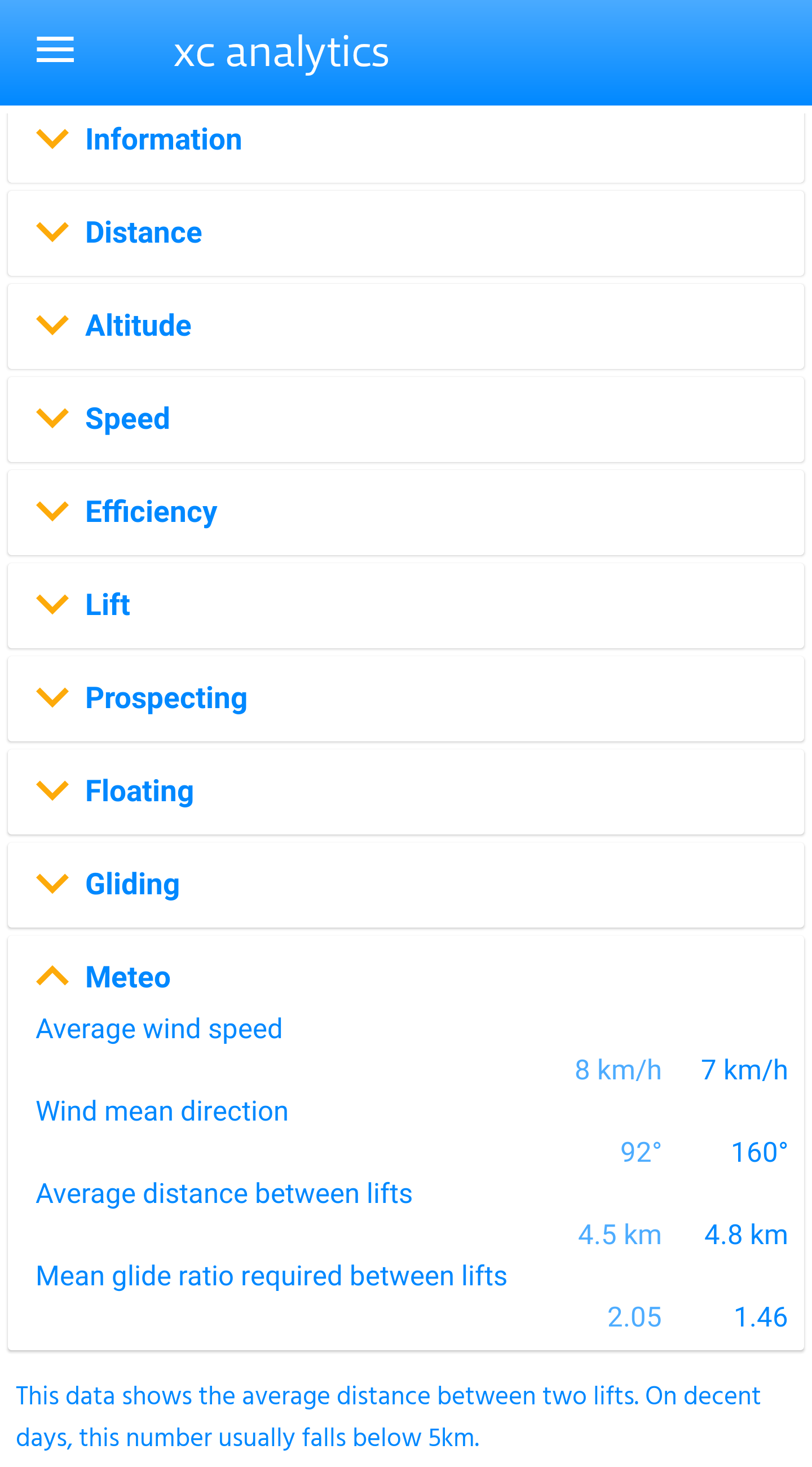 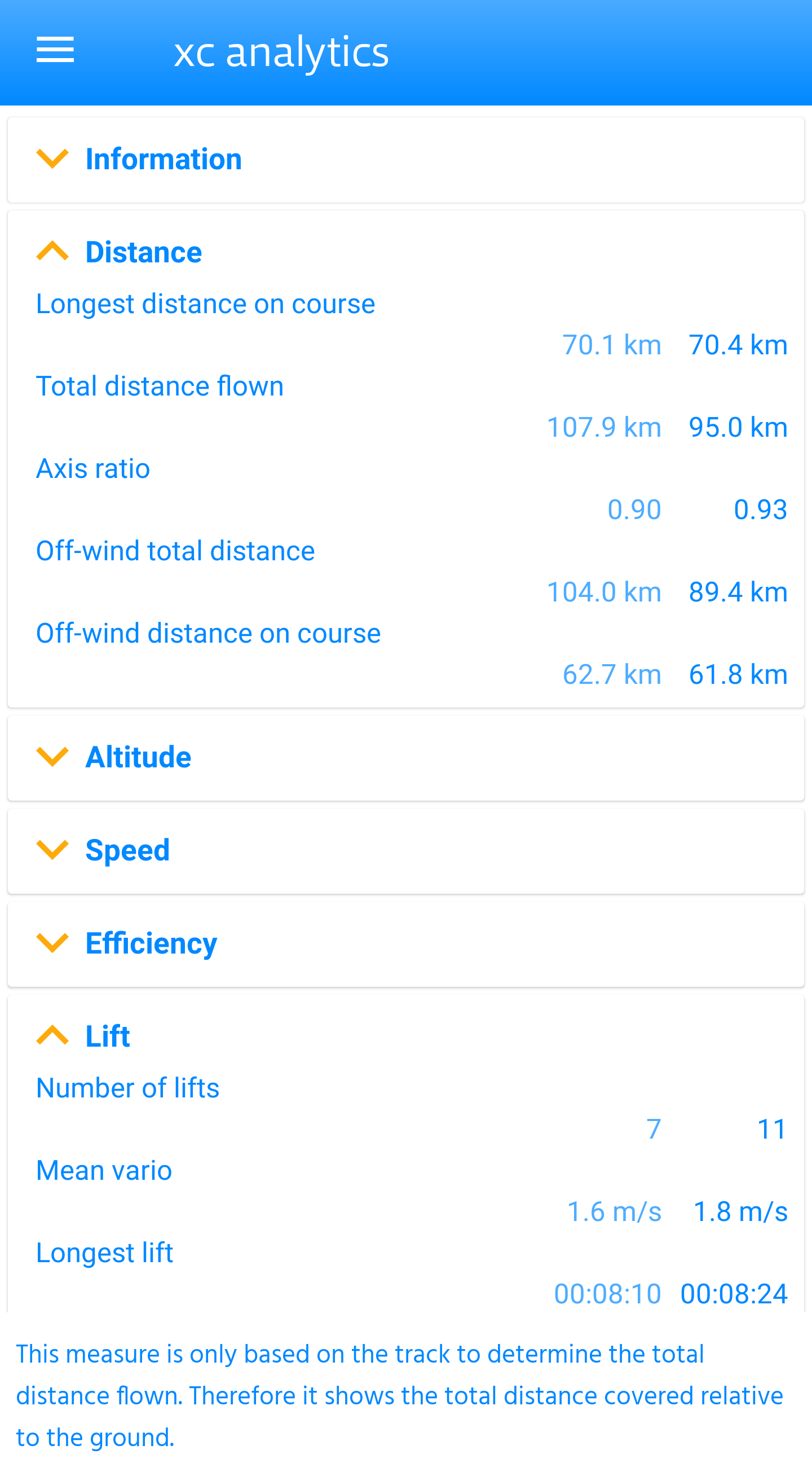 Let’s get to the heart of the matter !

In order to clearly understand the analysis, for this first exercise, we will simply compare the tracklog of the task’s winner, to a pilot who represents the average of those who completed the task. This "average" pilot, whom we will call "standard" because his level has nothing average of course, is the closest to the average score of those who have completed the task, 900.8 points, and the closest to the average time taken, still by those who have completed the task, which is 02:09:22. The analysis is done on the fraction of tracklog starting at 13:00 (beginning of the task), and ending when each of the two considered pilots enter the end of speed section (ESS), respectively at 14:59:04 for the first, and 15:09:53 for our standard pilot. The careful reader should be able to name the latter by now, with these clues : it is Andy Tallia.

To begin with, what do we see on the map? The two pilots fly a large part of the flight together, it is only after the second (and last) turnpoint that the gap widens. This is a pattern we often contemplate in competitions, where pilots usually move forward in groups up to the last kilometers of a race. Basically, there is no point in taking risks at the start of the task, potentially landing away from the group. It is better to remain within the group but placed at the forefront, and try to go for the kill in the last kilometers. This is pretty similar to the strategy applied in cycle races.

On the weather side, both pilots enjoy a light wind on average (10kmh), without almost any change during the task or relative to the altitude, they also get high cloudbase (around 3000m, limited by airspace) and narrowly distributed lifts (4.5km on average), with nice varios (+1.7m/s on average). A beautiful day for free flying !

Let’s look at the statistics now. We can see right away that the winner minimized the total distance flown (95km against 107.9km), flying closer to the lines defined for the task (axis ratio of 0.93 vs 0.90). He also flew on average about 150m higher, and more importantly in a much tighter evolution stripe (493m vs 751m). This concept of evolution stripe is valuable, as it means that the best pilot has overall lost less altitude while gliding, and in the meantime getting better varios (0.2m/s difference on average).

Could that be partially explained by flying speed ? Maybe. We can see that Chigwon Won flew mostly slower while gliding and elsewhere, he « pushed » less, probably emphasising on his sensations during the glides, thus slightly improving his glide ratio. That’s an interesting point, because it’s often said that to win the World Cup, you have to push constantly. Not this time, apparently. The speed is a fundamental cursor to needs to be fine tuned at each time, according to the external factors : weather, position in the race, altitude, relying more on the « feeling » or not, etc.

As a result, Chigwon spends more time gliding, with a better glide ratio (« hovering »). In addition, we can notice that it takes him less time to find the lifts and to center them (time lost per lift of 9 seconds vs 17 seconds, with a better vario during these phases). On the final and decisive section between the two pilots, that can be initiated at 14:10 local, the analysis confirms: the strength of the thermals found is the same (+1.4m/s), but the Korean pilot still has better varios while gliding (-1.8m/s vs -2.1m/s) because he glides slower (average air speed at 42kmh vs 49kmh). Just on the glide starting at 14:10, he saves 53 seconds (height difference divided by the average vario) thanks to the 74m of altitude above our standard pilot, while going a little further to find the thermal. During this final portion, as the winner covers a « total distance flown » of 37.7km, the French pilot posts 48.9km. Based on the above-mentioned average air speed, this extra 11.2km is transformed into a potential delay of nearly 14 minutes, not far from the 10 minutes displayed at the ESS. 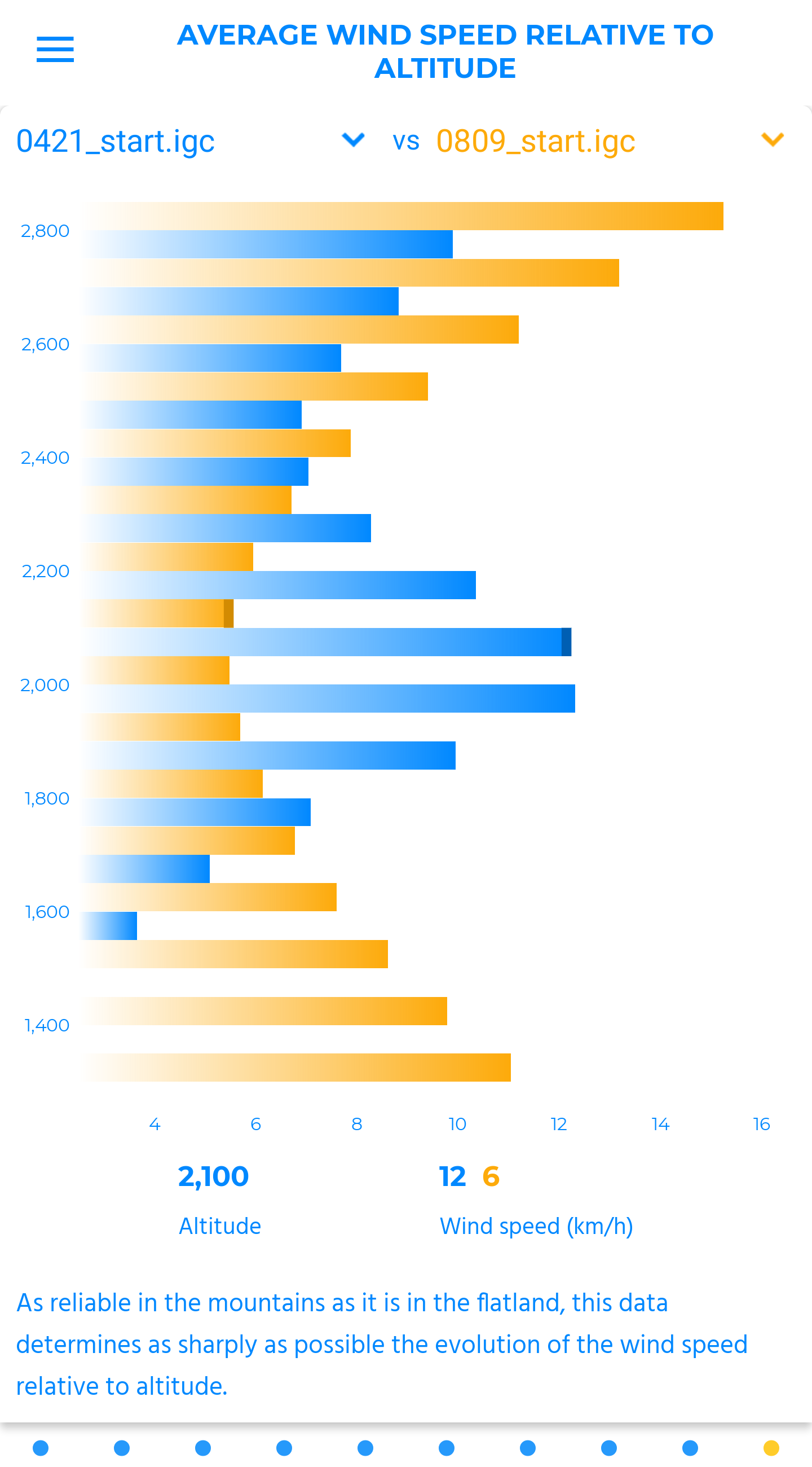 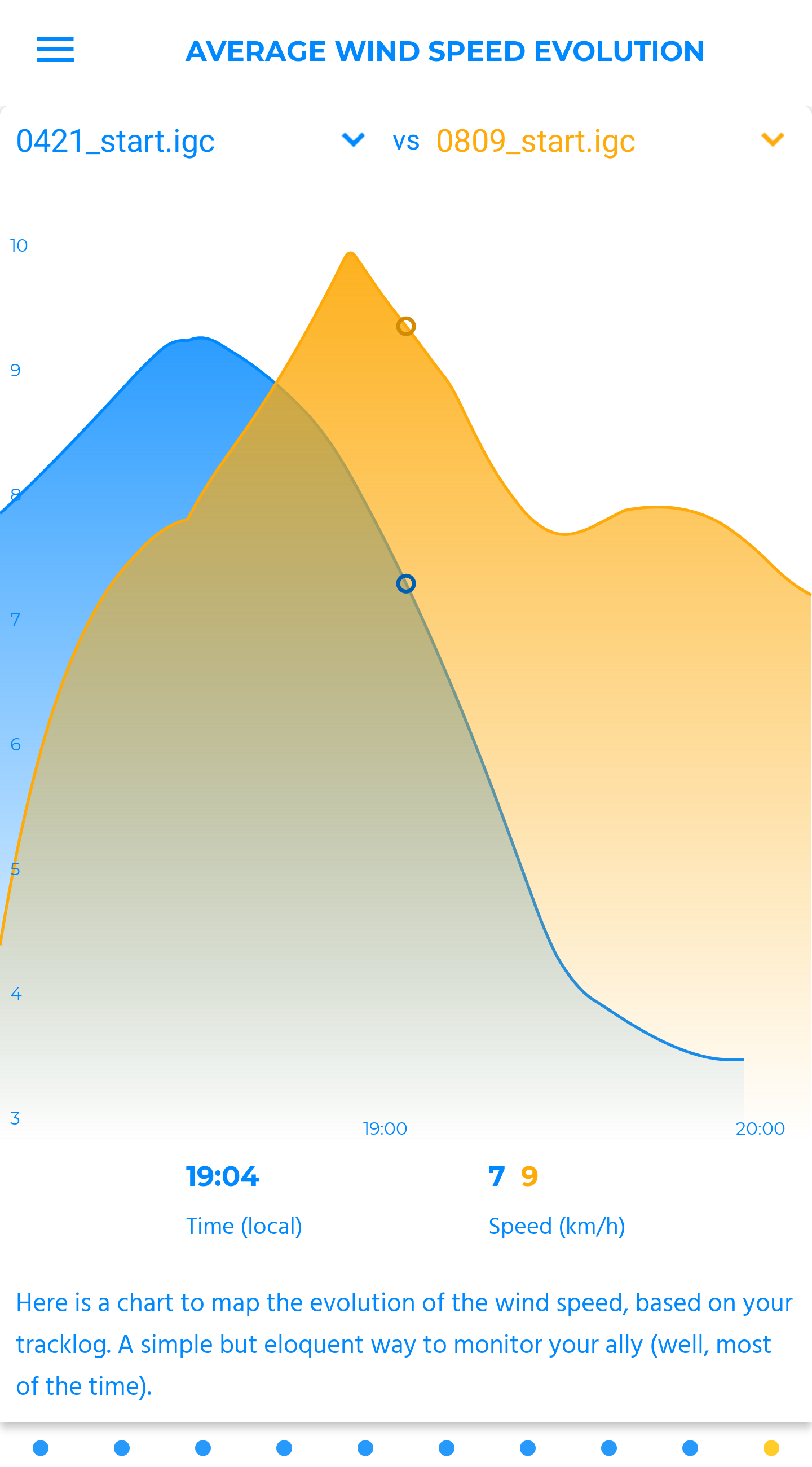 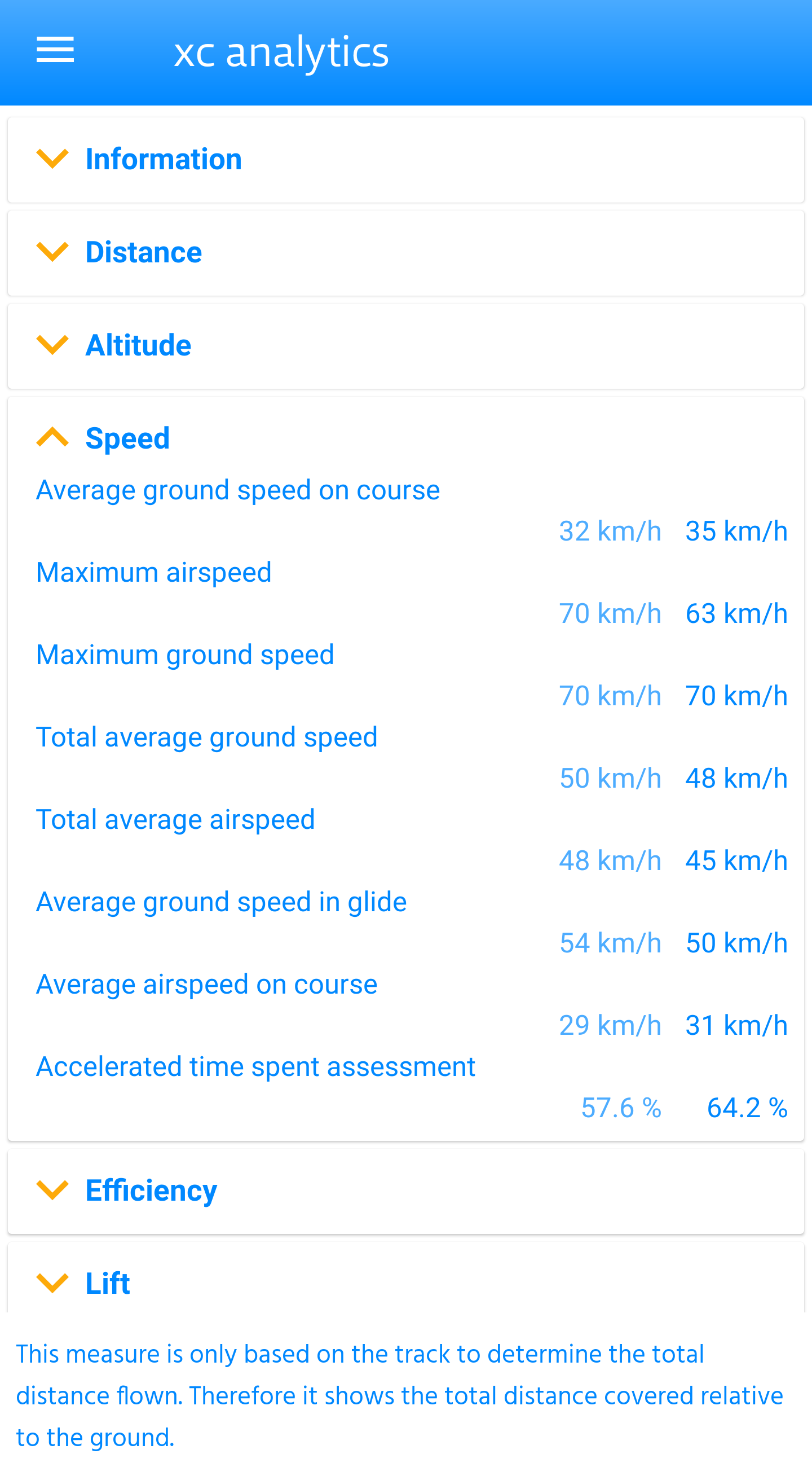 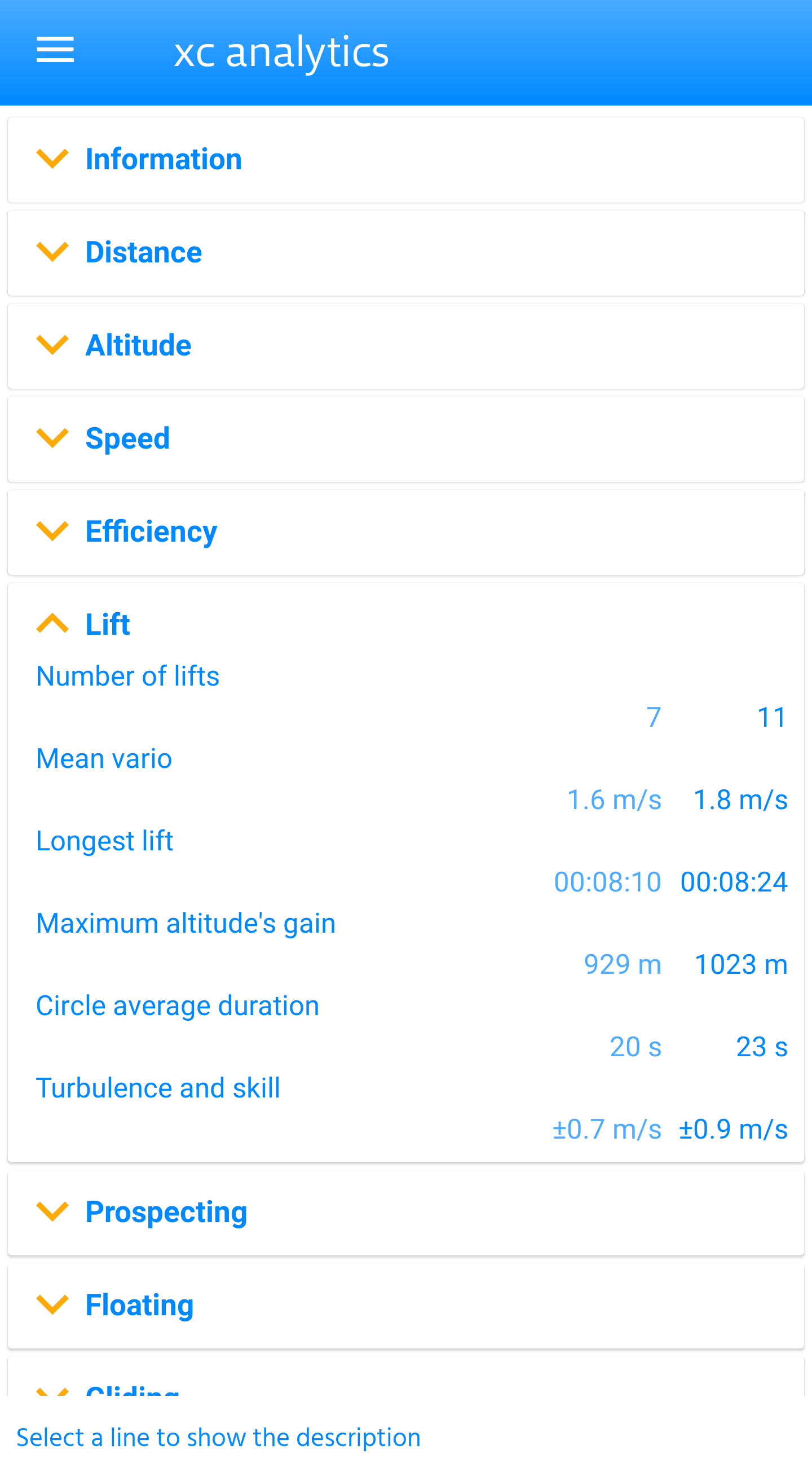 Over the whole task, we saw that, flying generally higher, the winner managed to fly faster without pushing aggressively (as indicated on the average speed per hour). He was able to go with the flow to improve his gliding’s sections, which represent more than 66% of his flight time, compared to less than 58% for Andy (see the pie chart « phases »). We can notice that the turning radii are less "clustered" around the same value (30m) for Chigwon, who seems to have adapted to the thermals better, bringing out stronger varios. To finish on a funnier note, we guess that the circling direction for the task must have been set to the right, since the two pilots circle mostly on this side during the flight !

We could obviously go much further in the analysis, by comparing these figures to the pilots' stories. But as we have seen, the key point is that it is now possible to bolster your debriefings, your insights, your discussions and therefore your progression thanks to clearly defined and quantified indicators, available into xc analytics.


Join us on https://xcanalytics.fr and on Facebook https://www.facebook.com/xcanalytics/, and discover the android app of statistics applied to Cross Country flying ! 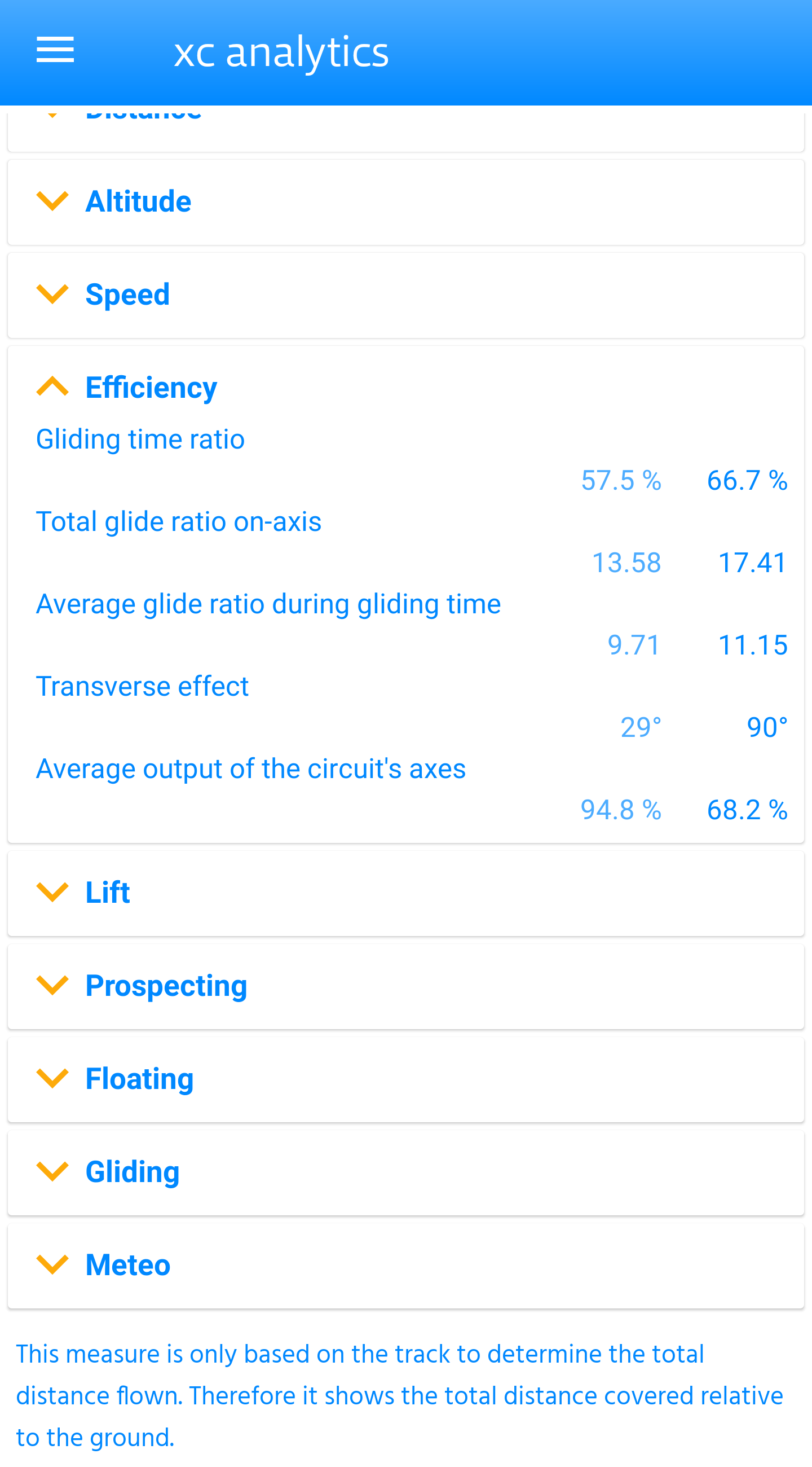 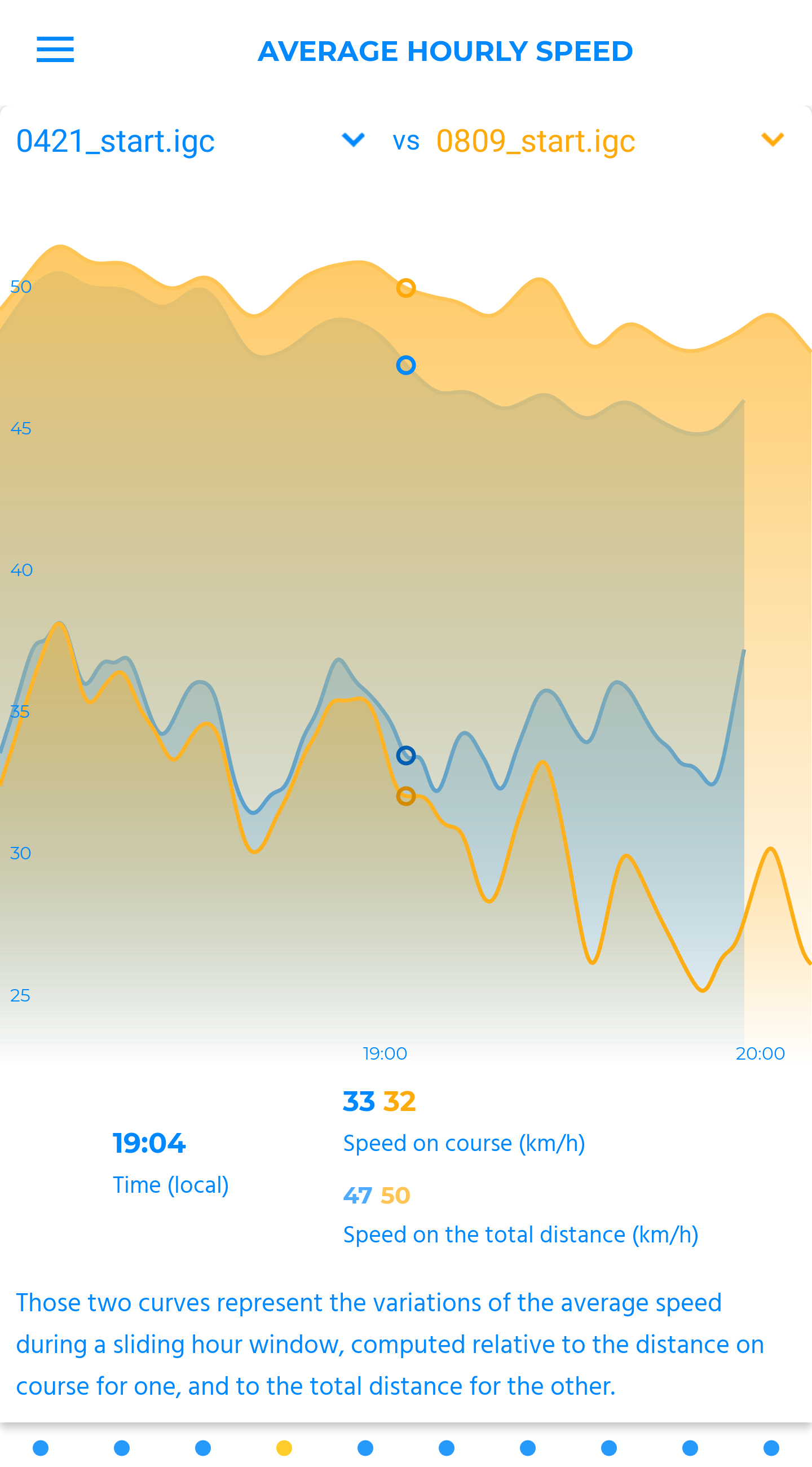 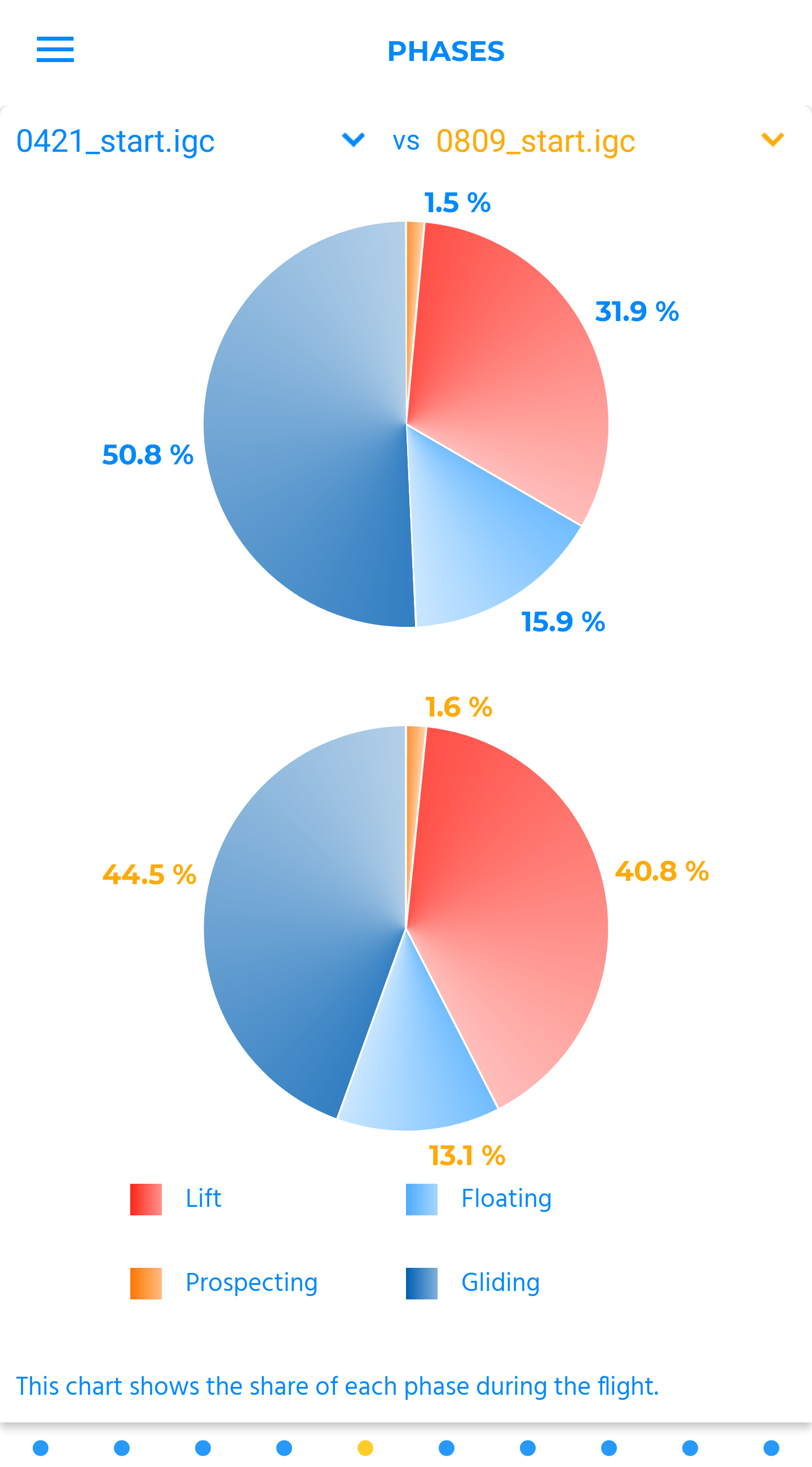 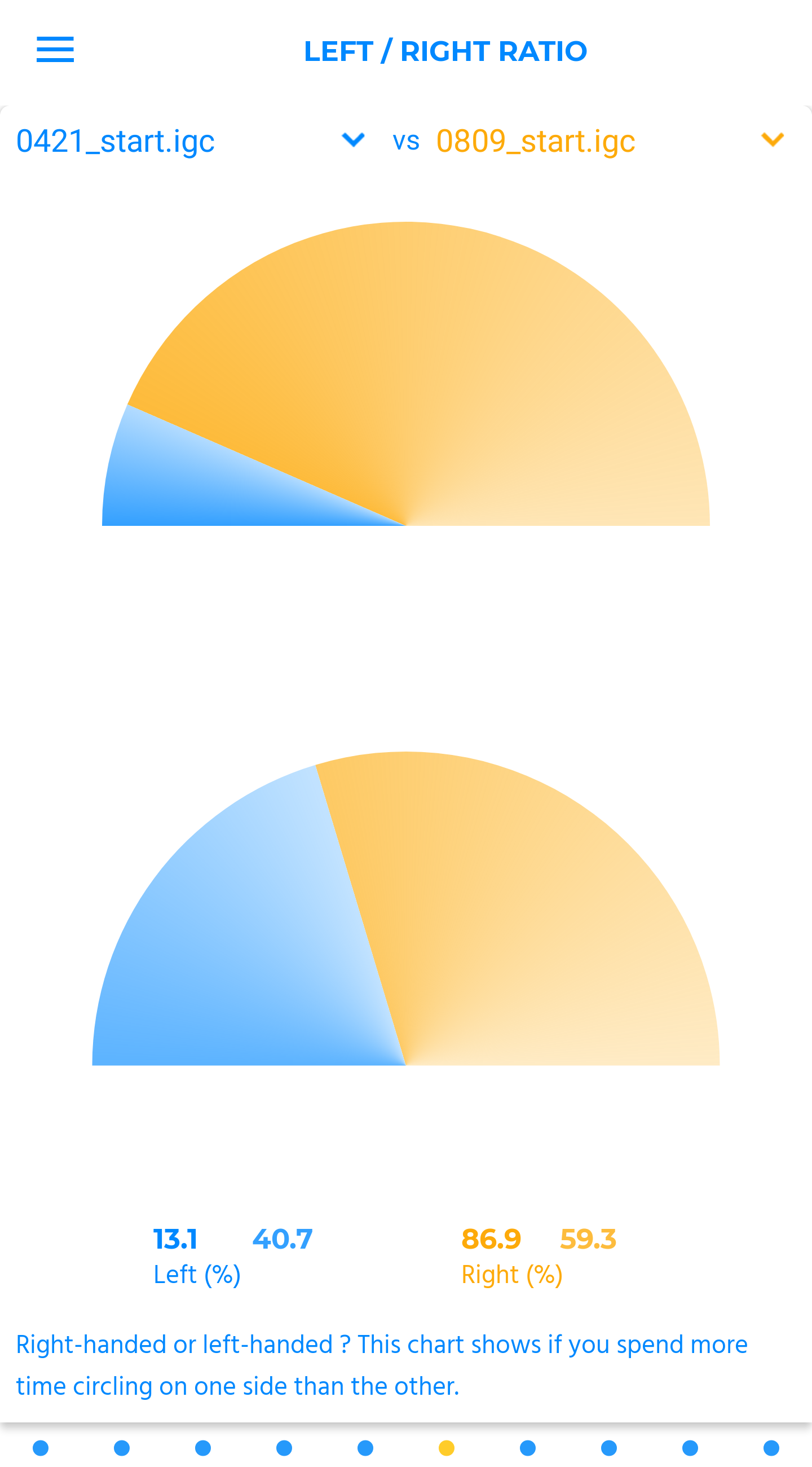