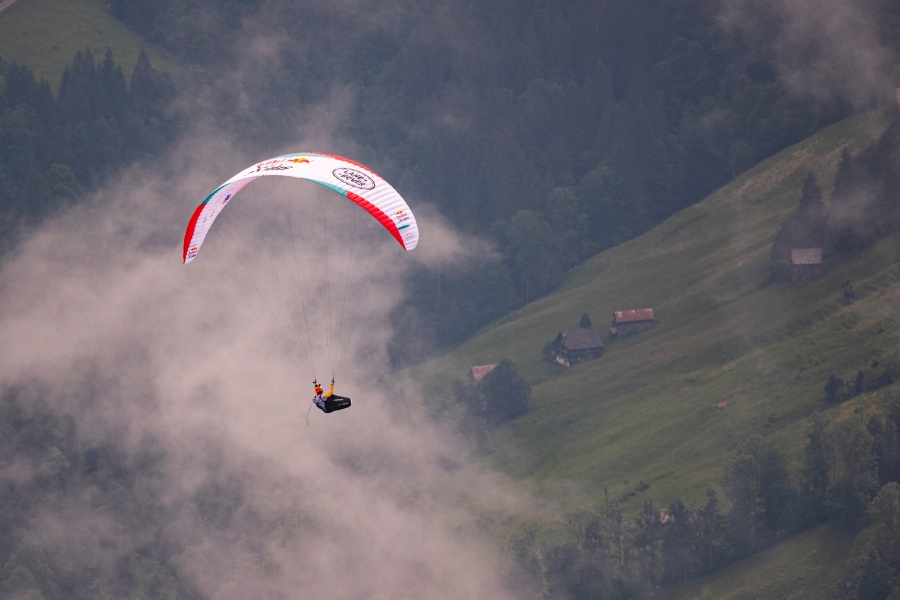 After an exciting prologue, we are embarked on this wonderful adventure that is the RedBull X-Alps, edition 2021!
And the athletes burnt their soles and displayed their pilot’s skills right from the start! Indeed, after five days of racing, as these lines are being written, turnpoint 7, Fiesch, is in sight for the incredible Chrigel Maurer, who seems to dominate the race once again. However, this year, it is tight, and many are standing up to him: Patrick von Känel, Aaron Durogati, Benoit Outters, Maxime Pinot, Simon Oberrauner and Paul Guschlbauer, all well-known names for the fans! This is what we will see, through the statistical analysis, to contemplate the exceptional level deployed both physically and in the air, and the small gaps that separate them. Let’s get started!

To begin with, we will focus on the first four days, from the start until the end of the day where turnpoint 6, Säntis, was validated by the first athletes. We will make another progress report after the turning of Mont Blanc, and a last one for the apotheosis of this adventure, the finish at Zell am See. First, it should be noted that the figures presented here may differ slightly, particularly for hiking, from those presented by the RedBull X-Alps. We rely on data that are not necessarily the most accurate. But they are particularly telling, as you will see. Let’s start with the “hiking” part, from the table below.

Impressive levels are already noticeable on cumulative ascent achieved over these first four days, with Benoit Outters and Chrigel Maurer beyond 16,000 meters! To give an order of magnitude, the UTMB (Ultra Trail du Mont Blanc), one of the most famous races in the world of trail running, is about 10,000 meters of cumulative ascent, and without a backpack! In terms of average speed, Maxime Pinot and Markus Anders, who are just above Benoit Outters on the time per kilometer (which takes into account breaks), master the discipline. And of course, just look at the performance of Yaël Margelisch, so strong, especially for her first participation!

In terms of effort management, let’s have a look at two parameters. First one, the pace regularity: measured by the variability of the average speed without rests, it depends largely on the terrain and the chosen routes, but it is still relevant as we will discuss further in the next progress report. More significantly, consider the table of rests (on the right), well deserved, which marked the journey of our athletes.

We see a fairly similar number of rests, but the total resting time can vary from single to double, even within the top 10. Whether they are in a hurry, or able to recover very quickly, we can raise the question of this longer-term effort. Will this parameter have significant consequences for the rest of the race? In any case, we can already distinguish the advantage of pilots at the outposts: flight, which, as with each edition, is the cornerstone of victory…

When looking at the time spent during the four phases of flight detected by XC Analytics (Prospecting, Lift, Floating, Gliding), several results draw the attention, as shown in the table below. Aaron Durogati and Damien Lacaze lose little time looking for lifts, which is always a sign of efficiency. But the big winners are those who spend the least time in Lift (Pinot, Genovese, Maurer), thus contributing to Floating and Gliding, by taking advantage of the air mass and showing their airborne talents.

Even if the fact of being in a favorable weather zone plays undeniably a role, it is those who have made an excellent start of the race (Genovese) or a spectacular “remontada” (Pinot, Gierlach), that catch the eye in these statistics. But despite the importance of these four pillars of flight, they are not enough. Speed and altitude also account for a large part of the performance.

Based on those two elements, we find our two leaders, the eagle Maurer and Patrick von Känel. Their respective speeds are very high, and, combined with a high-quality phase distribution, they manage to keep the lead of the race. Moreover, Durogati, Pinot and Lacaze are the only ones to keep up with the average flight speed imposed by the two Swiss.

So it’s no coincidence that they are also in the top 10 of the pilots. Also interesting, the altitude factor: Maurer and Känel fly higher than the rest of the group, and the latter tends to have more margins above the mountains. A point that may seem innocuous, but in this race of numerous risks, having this safety valve always plays a role in the probability of materializing an incident. But to gain altitude, it is necessary to find thermals, and more particularly, those offering the best varios…

And in this game, no one is getting an edge, the gaps are small. However, by re-linking these data with those presented above, the picture becomes less and less blurred. To be ahead, there should be no “weak” parameter.

This may seem trivial, and yet: pilots like Durogati or Outters each have strong points, at the top of the rankings, but also weak points. On the other hand, Maurer and Känel show no weak points, all their statistics are systematically in the top third of the top 10.

It is perhaps this consistency and regularity at the highest level, both in hiking and gliding, that makes the two Swiss close at hand, but not undertaken. At least, for the moment… See you in a few days for the next edition of this progress report, once the athletes have turned the mythical Mont Blanc!