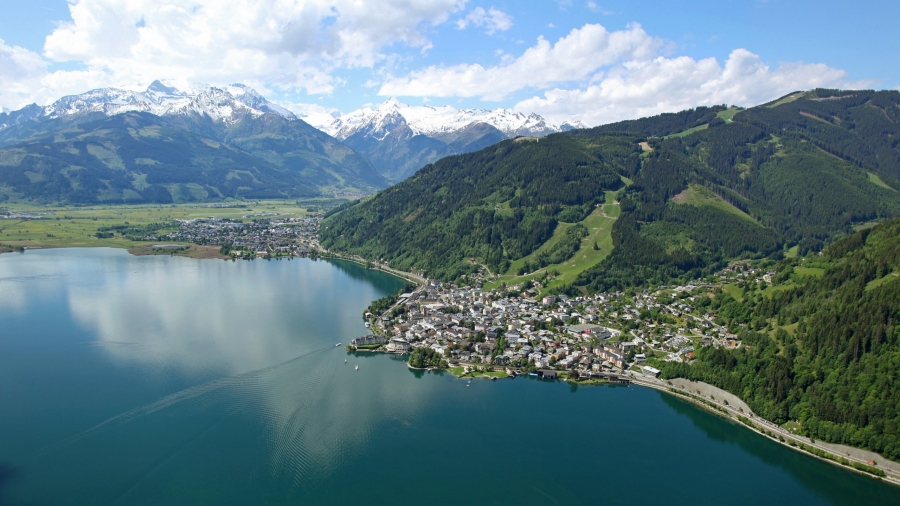 There are five of them. Five have completed this tenth edition of the RedBull X-Alps, after a fierce fight for each place in the ranking.
Even if some may have regretted the course not reaching the Mediterranean, it must be said that this loop was technical, permanently under unstable conditions but nevertheless quite favorable to flight as a whole. So for this third and last analytical part of the toughest adventure race in the world, let’s take a last look at the athletes' performances in their entirety during these twelve days. The numbers* make you dizzy, so hang on… Zeel am See, here we come!

As usual, let’s begin with the hiking. The table below summarizes the main parameters, calculated over the whole race. In addition to some pretty crazy data when we consider the total hiking time or the cumulative ascent, we notice right from the start some striking points: even if he hiked less than the others, Maurer is also the one who spends the least time resting. Enough to bring back into fashion the fable of La Fontaine, the Hare and the Turtle! There are also disparities between the participants: Schelven walked more than double the distance of Maurer, when Gierlach climbed him almost twice the cumulative ascent of Oberrauner. This says a lot about the differences in the level of fatigue that we could see among racing pilots! Before finishing with the hiking performance, let us note that the two French, Outters and Pinot, demonstrate their physical abilities on the time per kilometer.

However, as it has already been said, it is essential to fly well during this race. The distribution between hiking and flying, presented in the previous point, is even more telling when we consider it throughout the race. This is shown in the following graph. 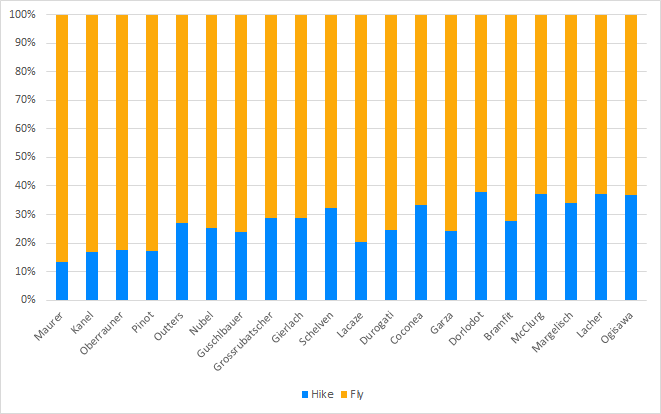 The ratio of each athlete is laid out according to the order of the final ranking. Apart from the four exceptions Lacaze, Durogati, Garza and Bramfit, we find our three groups already mentioned: the leaders below 20%, the chasers between 20 and 30%, and the rear of the pack above 30%. With only 13% of the total distance (odometric distance) hiked, Maurer signed his seventh victory beautifully! In fact, when you focus on detailing his journey and that of the other pilots, you can clearly spot the "split up" moments.

The chart below shows the top 10 cumulative circuit distances (data for Guschlbauer on the 20th of June is missing). The maestro’s «magic move» is immediately visible on the 27th of June, in foehn conditions that are not (according to him, there are no gusts in the lower parts of the boundary layer). The next day, his pursuers pick up, and Outters limits the damage. Finally, with the conclusion near, it is Lacaze and Nübel who strike and move up significantly in the ranking. So, as with the previous points, we can legitimately wonder what can produce such recoveries thanks to the phases of flight. Positioning in relation to the weather is, as always, the determining factor. But the pilot’s talent is also a big part of it: who else could have made Maurer’s flight on the 27th of June? 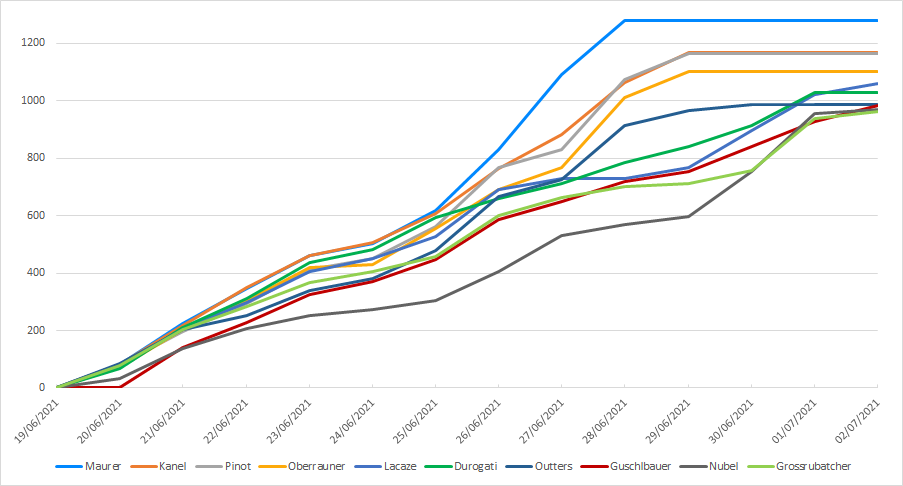 Every flight has essentially three success components: quality, speed and duration. Quality depends partly on speed, and to a small extent on duration. Let’s consider the duration first, represented in the table below by the flight time. To properly account for deviations, the data were reduced to an interval of 0 to 100 for each day, 100 for the pilot with the longest flight, 0 for the pilot with the shortest flight, and in the last column, the total flight time is displayed in hours.

No surprise, those who fly the most are ahead, and vice versa. However, some chasing pilots manage to stay in the air better than the rest of the pack some days. However, this does not necessarily translate into positions won in the rankings. Let’s take the examples of Garza and Bramfit. Garza flies for a long while on the 21st and 24th of June. Unfortunately, he loses the advantage of these two days by not flying on the 22nd and 23rd of June. Bramfit does the same on the 14th and 21st of June, but as shown in the table below, his average speed is at the bottom of the table for those two days.

The other drawback adding to this aspect is the axis ratio. By dividing the distance achieved on the X-Alps circuit to the total distance covered (odometer), we can distinguish those who progress «on the line», from those who tend to deviate from it. In this respect, for Bramfit, the following histogram is without appeal. Only Maurer can afford to get away from the line of the circuit, because his positioning allows him to fly longer, at higher speeds. However, the eagle is not without flaws, because on days of flying «in the gaggle» with its competitors, we have seen that his flying skills are very close, and sometimes below the very best ones. 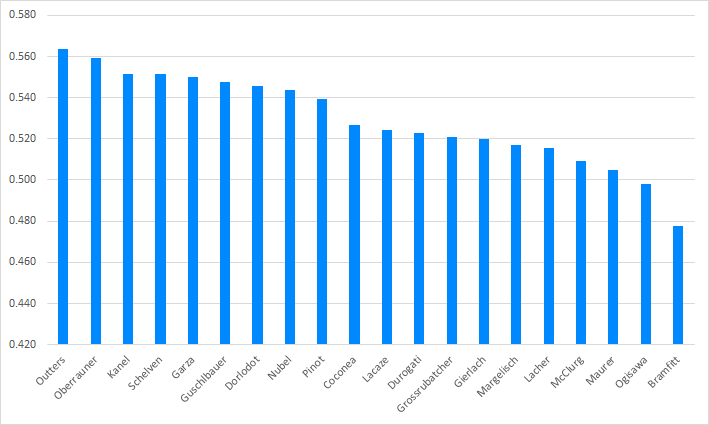 In order to get a general idea of the players’ level, here is the summary table of the respective phases and varios for this edition’s whole race. We observe that it is only a few percents, or a few hundredths, that separate the athletes on each of those different markers. Nevertheless, let’s try an aggregation exercise, out of curiosity.

Let’s go back to those markers, and let’s set them on a 0 to 100 basis again. We understood, thanks to the elements presented above, that it is they, allied to flight time, who explain the difference that is not due to tactical choices. If we calculate a weighted average of all these markers, these are the figures we get:

The order displayed is that of the final ranking. We see that the results of the aggregation speak for themselves, and correspond particularly well to the tails of the ranking distribution. However, there are three outliers: Gierlach, Lacaze and Durogati. Theoretically, we should have found these pilots higher in the rankings. So it was either the penalties, the lack of speed, or the tactical mistakes that handicapped them. More broadly, through this simple table, we have at our disposal the areas of improvement to focus on for each athlete!

This race is a great laboratory to understand the motives of performance, but also of progression. That’s what we’ve tried to present in those three progress reports, and that’s what XC Analytics does. You can also find ideas to help you balance your gliding skills, such as the right / left ratio (our specialists in this regard are Coconea with 86% of the time turning right, and Oberrauner 85% of the time turning left !), as well as advice directly from the analysis of your flights.

So, the RedBull X-Alps is over! You can resume a normal activity. Well, not quite, because the gliding season is in full swing, and we feel that the Hike and Fly will continue to attract new enthusiasts. XC Analytics and its team will be there to accompany you. We wish you long and beautiful flights, waiting for the eleventh edition!

* As a reminder, the figures presented here may differ from those given by the RedBull X-Alps, because we rely on data that are not necessarily the most accurate.