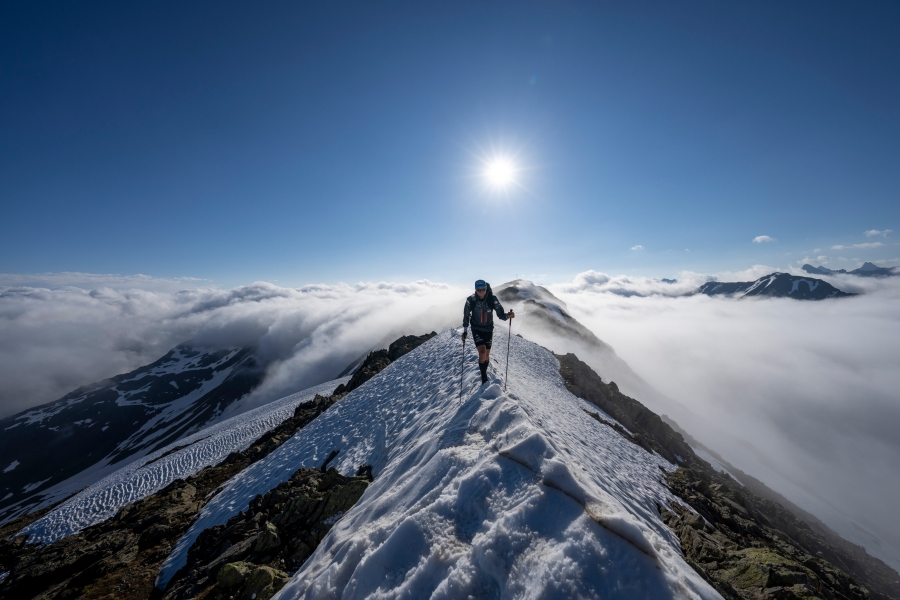 After a first report focusing on the first four days of racing (from the 20th to the 23rd of June included), we were caught off guard by the speed of the athletes to make this second report!
And for good reason, as the weather was more favorable on this window, from the 24th to the 26th of June (included). We also witnessed some very nice flights made this last day, allowing the leaders to reach the valley of Fiesch, and land around Brig. It therefore seems legitimate to focus more on the flight aspect in this second report. We will also be interested in what may have happened to the challengers, with nice progressions for some, and some fatigue for others. Let's go, towards Mont Blanc!

As for the previous progress report, let’s start the analysis by the hiking part, but considering all the athletes still in the race on the evening of the 26th this time. We see in the table below that the figures remain exceptional, both in terms of the time spent hiking, and the cumulative ascents swallowed. Striking! But some athletes, such as Garza or Nübel, and probably because of the gloomy weather, made the choice to go by the road, limiting the climbing factor, and saving more than 5,000 meters of ascent. The average speed is thus higher for the latter, with a very fast 6.9km/h of average speed without rests. Surprisingly, all the athletes travelled over the three-day period considered here, about as much as during the first four days, with an average of about 155 km. So overall, the pace accelerated! And we saw it through this tight race sequence, where everyone had a card to play.

Another interesting fact, which we said we would discuss again in this report: the variability of pace. If we consider the chart below, which reports for each athlete the variability of his average speed according to the cumulative ascent, we note different cases: some have a very regular pace in all cases (Ogisawa, Margelisch), when others tend to be more irregular when the climbing increases (Genovese, Pinot), and finally, another group (Maurer, Durogati) tends to become more and more constant when the effort escalates. Would it be a matter of distraction, related to the time runners choose to define options, discuss, feed, share on social media, etc.? Or is it really a style specific to each one, or more particularly related to the physical condition of each one in relation to the effort provided? This is a parameter that you will be able to consider yourself, in the next update of the XC Analytics app!

We know this since the creation of the RedBull X-Alps: the race is won in the air. To give a little more depth to this consideration already mentioned in the previous report, consider the histogram below, which represents the share of hiking and flying for each pilot: we could almost derive the rankings from it directly! The front of the race spends about 20% of the time hiking, the challengers around 30%, and the back of the pack is around 40% and more. 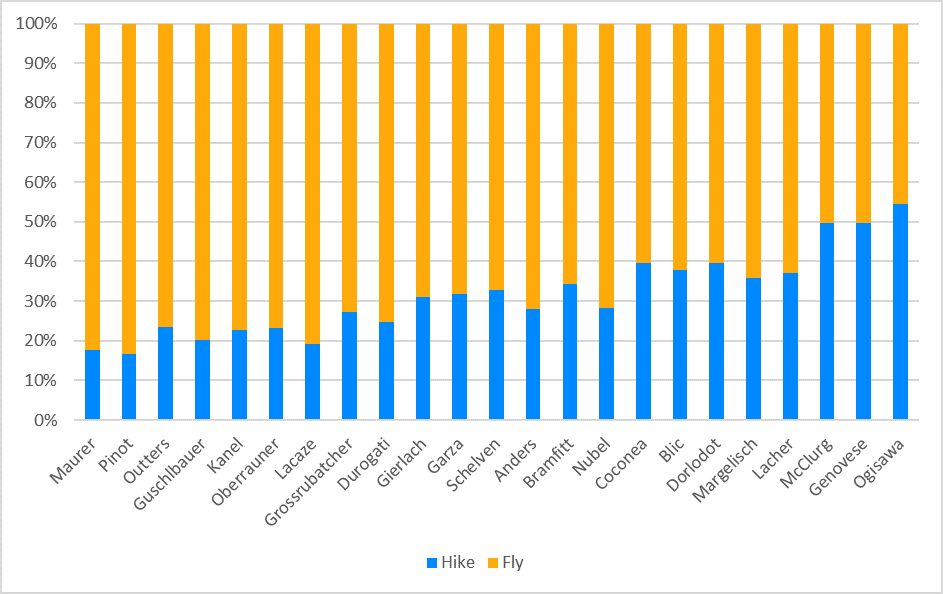 The champions of hiking, such as Outters, Grossrubatcher or Coconea, manage to partially compensate by their exceptional performance on the ground. We hardly dare to imagine the physical load and fatigue in the long term caused by such an amount of energy deployed!

On the flight side, we can clearly distinguish the rise of the French with very high average speeds, this time exceeding those of the Swiss. The name of the game is to attack for our compatriots, near and on the national ground. On this occasion, Pinot and Outters took the lead ahead of Maurer and Känel respectively at one time or another of this part of the race. 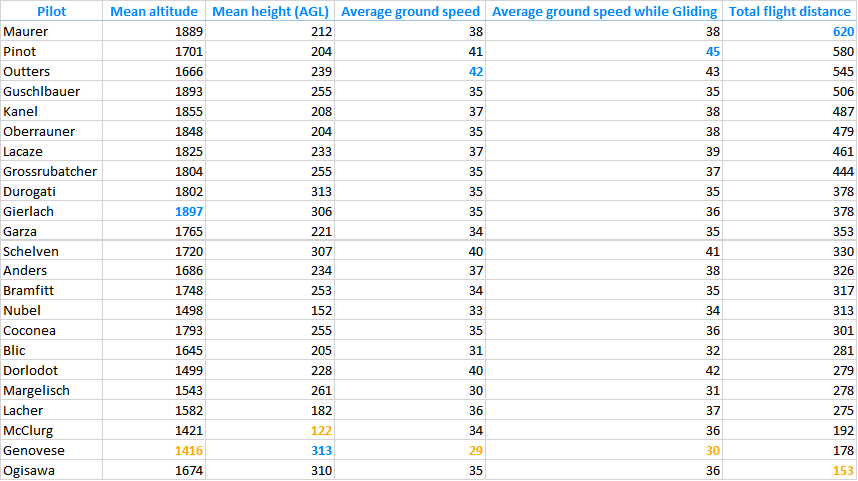 One could almost guess the change of attitude through these figures, also taking into account the altitude: the Swiss fly higher, with more margins, when the French evolve at lower average altitudes. But it’s not just the leaderboard that was messed up, and there’s a good reason for that.

This good reason is the Lift phases. As shown in the table below, in this three-day sequence, some challengers really played their cards right. With a very good average vario, and a large covered distance thanks to each thermal, Bramfitt, like Dorlodot, exploit the air mass well. We would have liked them to cross more lifts though! In this respect, they are the opposite of Garza. 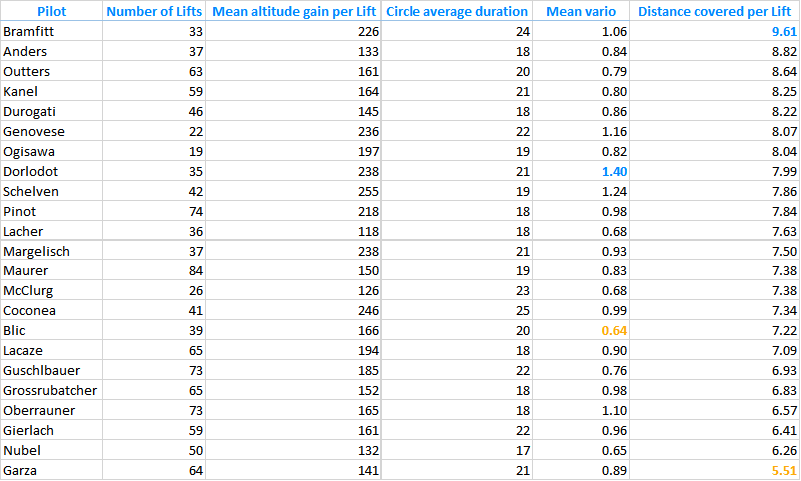 By looking more closely, we can discern the loss of momentum of Durogati, while Schelven, on the contrary, ramped up the rythm. This translates directly into the rankings.

The average pace of each pilot obviously varies depending on the weather encountered. But how does this affect the total distance covered or the hiking/flying ratio? Let’s take a look at the charts below, presenting these elements for each of the days considered here. 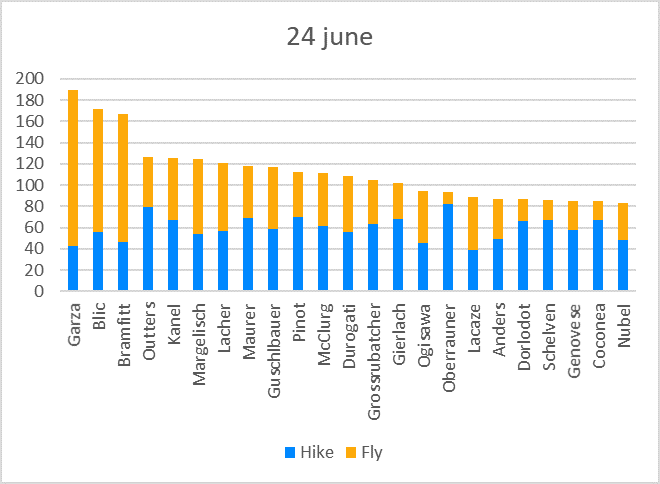 The day of the 24th is conducive to the area occupied by Garza/ Bramfitt, who make on this occasion very beautiful flights, and reducing the gap that separates them from the leaders. However, the unstable passage reached them on the 25th, while the leading pack begins to hit favorable conditions. This translates into ratios where hiking represents more than half the distance travelled, to less than a quarter the next day. 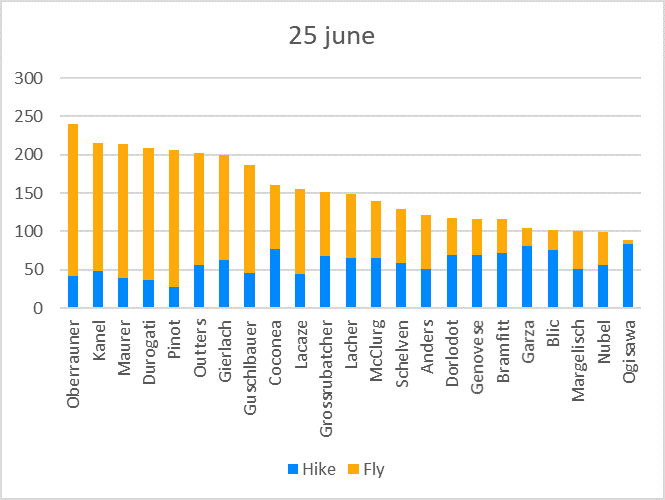 We finally arrive at the 26th, which made the paragliding planet tremble! Almost all the pilots hit good conditions, and the first ones are helped by their location in the race by the South wind now blowing. Hiking is practically non-existent, apart from the very beginning and end of days. We can see how much the choice of Känel not to reach the Sion valley cost him, and the gliding performance of Pinot (and Outters), who by his more direct trajectory (thus lower in total distance covered), manages to outdo the eagle of Adelboden. 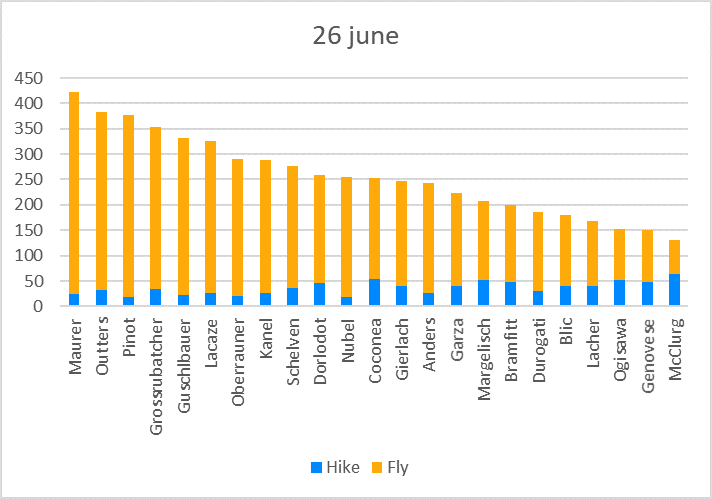 As we have seen in recent days, the adventure is not yet over. The options chosen based on the weather forecast will eventually have their decisive impacts. But on paper, it is undeniable, it is the French who dominated this second part of the race. In that regard, the flight statistics produced by the leaders in similar weather conditions are particularly telling, and confirm the importance of certain parameters revealed by XC Analytics.

See you soon after the 2nd of July and the official end of the race, for a final recap of the whole RedBull X-Alps, and its decisive factors!