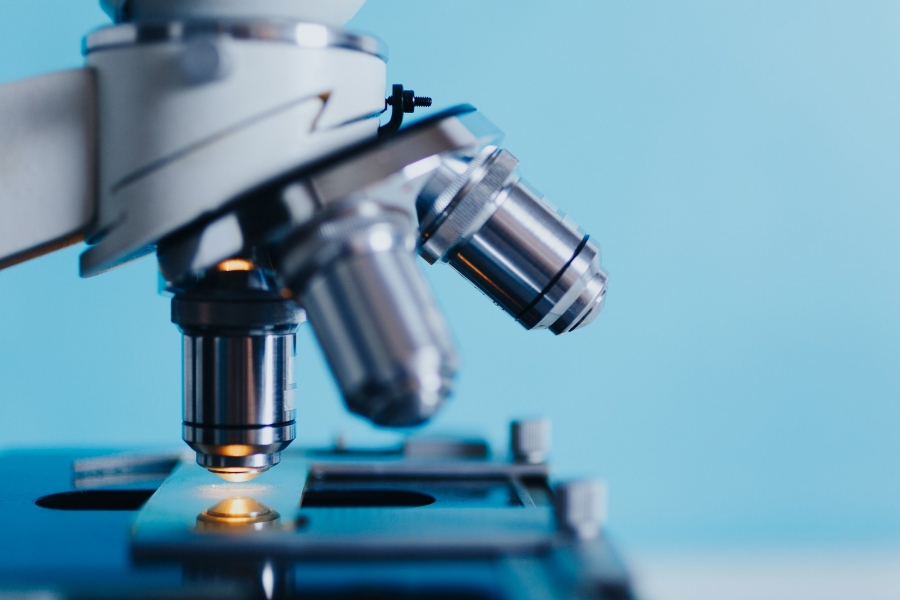 "Azerables" is a small village in the middle of France, in "Creuse" departement. During his record flight on the 1st of May, 2016, Martin Morlet arrives close to that point at around 5 o’clock (solar time).
After "Indre" flats and the marshy region of "La Brenne", he had just crossed "la Creuse" river. The sun is still high but activity is declining. His travelling companion, who is a little bit ahead but down, finds a weak updraft. He circles twice but gives up and quit for landing. Martin keeps an eye on that zone and feels the same. He insists a bit and it works again.
The river "Creuse" is a main tributary of "la Loire". It marks a true change in landscape. We are close to the "Massif Central" mountains. Ground elevation is going up gradually from 600 to 1200 feet during 15 miles. Crops have been replaced by meadows and hedges. Large and mild ripples stretch toward the NW with little streams between them.

For each giratoire, it is possible to calculate wind speed and direction and then, it north and east components. The graphs vs time of these components show important fluctuations as demonstrated before. They can reach up to 6 mph. The figures for this flight let appear a clear change between 4:10 PM and 4:45 PM. During that period, the East wind component is strongly fluctuating and the North component, stable until then begins to accelerate.

Now, Martin circles steadily in a strong thermal. Wind has strengthened. After 83 circles, he reaches an altitude of 5850 feet. After a short transition to the 64th thermal of the day, he reaches 6050 feet. The next image shows thermals 63 and 64 verticalised by a wind of 22 mph from 343°. 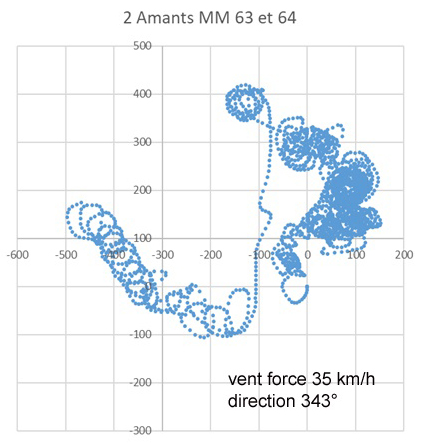 During the thermal 63, Martin has drifted over 9 miles but, within the CBL, the thermal stayed within a square of only 400 meters. Martin changed his position within the thermal two times, but verticalizing wind did not change. Let us focus on the giratoire from 17:13 to 17:22. Martin climbed 1200 feet, but the center of the circles did not change by more than a few meters which implies that the wind has been extremely stable at exactly 21,743 mph. 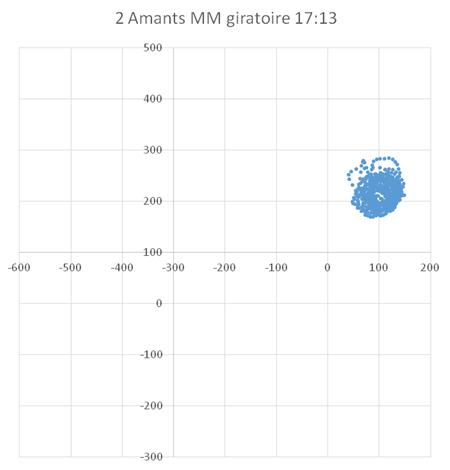 During that time, vario fluctuations were important which means that air was not moving as a block. Only horizontal speed of the thermal column was stable. On the picture previous to the one above, one can notice that the 64th thermal has a slightly different move but there is no evidence that it can be split from the 63.

In the preceding article, we have exposed a method to calculate the starting point of warm air coming to feed each point of the thermal column. Here, where the thermal lasts a rather long time, its ground track should provide interesting information. Figure 54 shows the relief of the region that Martin was flying over during thermals 63 and 64. 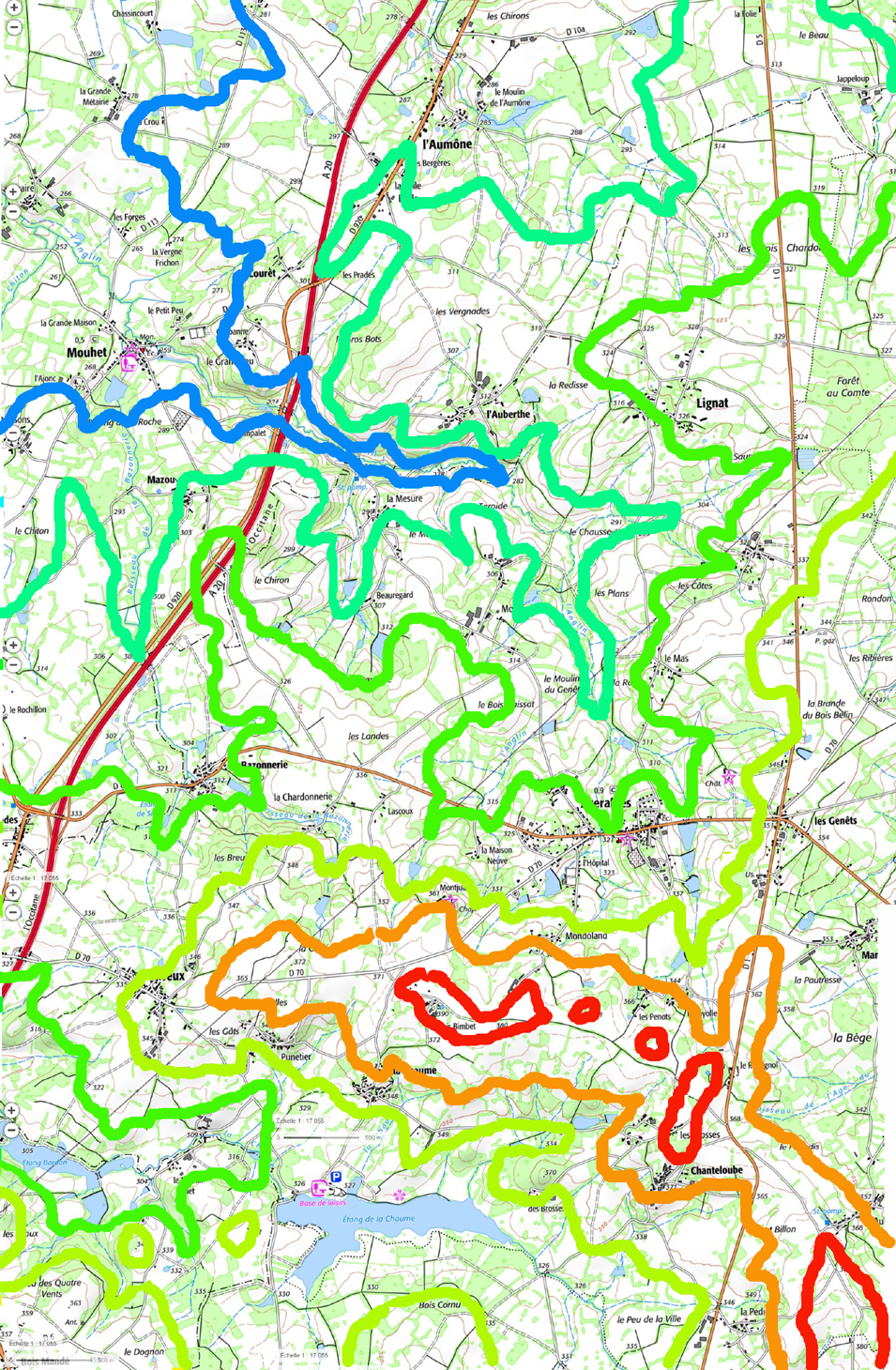 The contour lines have been highlighted: blue for the lowest at 890 feet, red for the highest at 1280 feet. There is a contour line every 66 feet with a color going gradually from blue to red. At top left corner, one can see the "Vicoin" valley, small tributary of "la Creuse" which flows west. South of the "Vicoin", one can see a large ripple which is going up to the little village of "Bois Bimbet" at 1300 feet and then a mild slope which goes down to the large "La Chaume" pond. Figure 55 shows the relief after "La Chaume" pond. One can see another plateau at around 1300 feet. 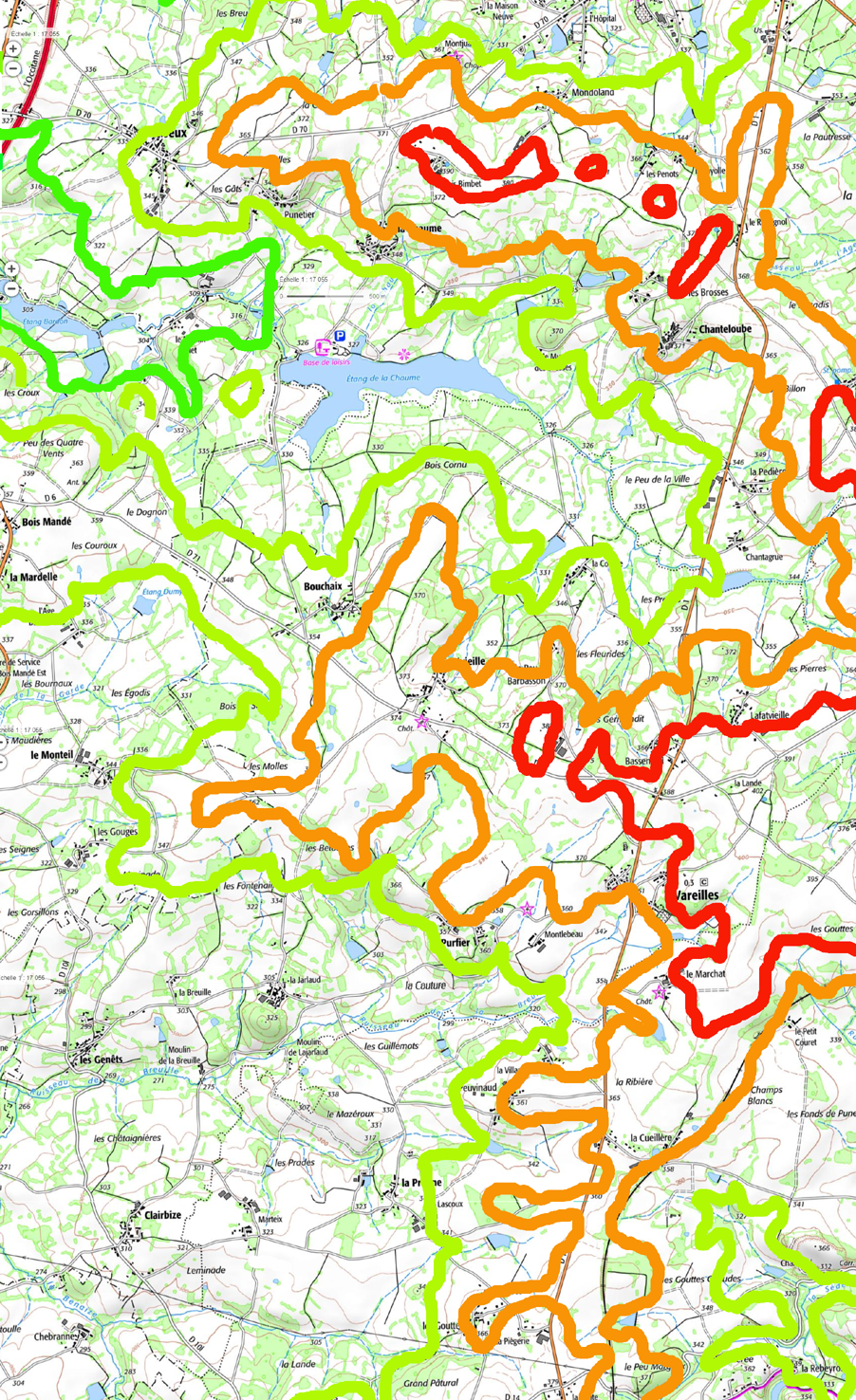 Next figure shows hot air starts on this landscape.

There is one point for each of the circles of the 63 and 64 thermals. They are on a straight line which means that the thermal is not wondering laterally above more favorable spots. But points are grouped on three spots. The first one, starting from a plateau above the right side of the "Vicoin" close to the farm called "La Grande Métairie", feed the first part of the 63th thermal. The calculated starting point roams the plateau back and forth over one kilometer. Then, he moves quickly, cross the "Vicoin", climb a NW slopes, cross the highway and slows down only after reaching the mild ripple climbing to "Bois Bimbet". Again, it moves back and forth on the SW side of the ripple, but never goes down to the "La Chaume" pond. At the end of thermal 63, the starting point leave the "Bois Bimbet" zone and comes to the second plateau, 4 miles further at 1200 feet. During the whole 64 thermal, it stays along a line a little further the highest point. It is important to note that during the thermal 64, the pilot is 5000 feet high. So, the starting point calculation is less accurate. Nevertheless, starting points keep well grouped. Ground track suggest that the thermal is preferably fed by these flat or slightly curved areas limited by little streams on each side.

This analysis cannot be extensive because we have no indication on the size or the position of clouds. And they have an important impact on ground heating and may be on starting points positions. They can also influence climbing air speed at the top of thermals impacting the calculation of starting points. Following conclusions have then to be taken cautiously.

"Azerables" thermal from the record flight of Martin Morlet provides interesting indications on the behavior of flatlands thermals. It shows that a thermal can stay during more than 30 minutes and have a track on the ground which extends over more than 9 miles. As it is the pilot which decides to leave the thermal, it may be possible that it continues its course. In the former article, we said that relief had a limited influence on plain thermals. Here, the starting point of warm air has been calculated in the same say. We can observe three preferred starting zones. Each extends over 1 to 2 miles. The first one is across a plateau slightly oriented SW. The second is along a mild and long ripple oriented NW to SE which ends above a large pond. The third one follows a flat dome which marks the highest point of the landscape. On the contrary, small valleys, rather open but well marked, do not produce any starting point.