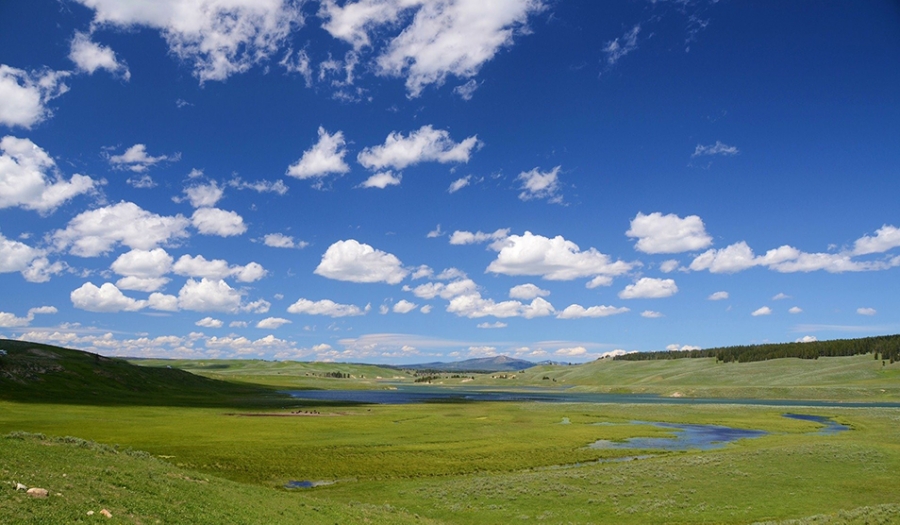 See you tomorrow at a quarter to 1 kWh !

One of the main questions in the preparation of a paragliding cross-country flight is the estimation of the minimum cross country start time for a given day. This time is quite difficult to estimate. But it allows us to rely on a suitable arrival time on site. And it is better to arrive at the right time, because:

- arriving too early on site is very restrictive. In fact, on one hand, in terms of organization, it requires that all pilots be operational very early. And on the other hand, it has also an impact on well-being as it implies to get up very early. But arriving early is often a safety measure. You can serenely prepare your equipment, while beginning to gather information about the local air mass. It is also an advantage for performance: it is possible to conduct a briefing on the upcoming flight in terms of, for example, areas to avoid and weather.

- arriving too late is much more problematic. Pre-flight preparation may be shortened and this may cause safety issues (for example, forgetting to fasten). In addition, cross country performance is reduced since the flight time between the minimum cross country start time and take-off does not add distance. Finally, on some days on the flatlands, there may be only one extraction window, the first being often the best. So arriving too late can also mean flying locally all day.

The purpose of this article is to provide a partial answer to the question of the minimum cross country start time. In particular, it is necessary to study the link between this time and solar energy. Thanks to the XC Analytics application we can calculate the time, the GPS coordinates, and the altitude of the cross country start for each flight track. Once this data is known, it is then possible to calculate, on the one hand, the instantaneous solar energy at the cross country start time, and on the other hand, the accumulated solar energy from sunrise until this start time. The energy calculation is performed assuming there are no clouds, and the average slope of the terrain is null (flat terrain). By doing this calculation on a sufficient number of tracklogs, a trend appears. This is what we will reveal in the rest of this article.

To conduct this study, we used flatlands' tracks in metropolitan France, recorded on the CFD (the French paragliding distance platform). We excluded from the analysis tracks showing a circuit distance of less than 30km, and also tracks without a climbing phase of more than 300m. This ultimately represents a database of 7051 flight tracks, from 2004 to 2019. The chart below shows the number of flights analysed per year. 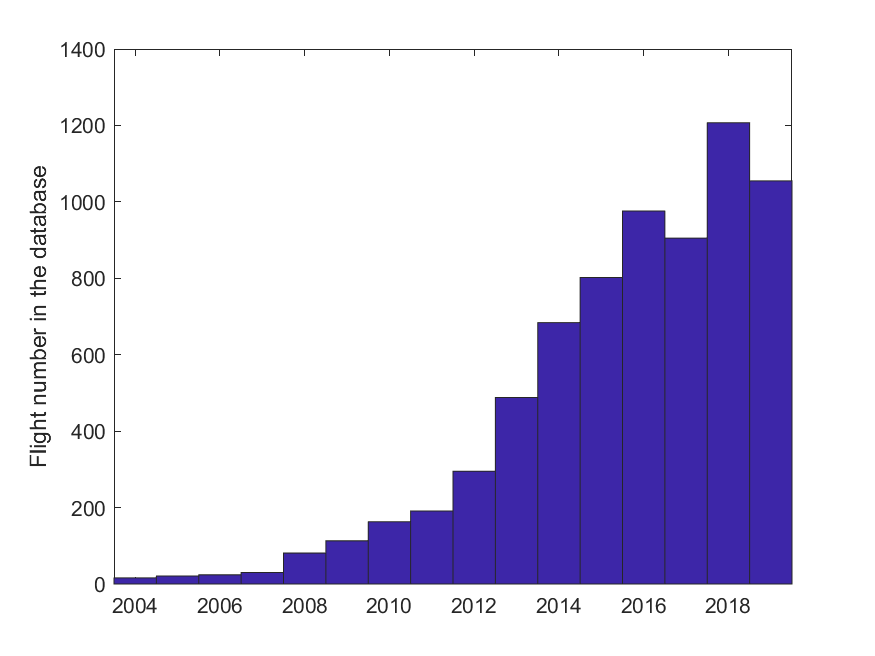 The graph below shows the instantaneous solar energy received at cross country start time, versus the date of the flight for the entire database. It can be considered that the annual solar variations over twenty years are negligible enough to retain only the month and day of the tracks. The red dots correspond to flights where the cross country start was carried out before the solar noon, and after the solar noon for the black dots. It is very difficult to draw a trend from this chart. However it can be seen that the bell shape, linked to the maximum solar energy developed during a day, is well reflected. The top of the bell represents this maximum solar energy and it corresponds to flights located around the zenith (the solar noon). 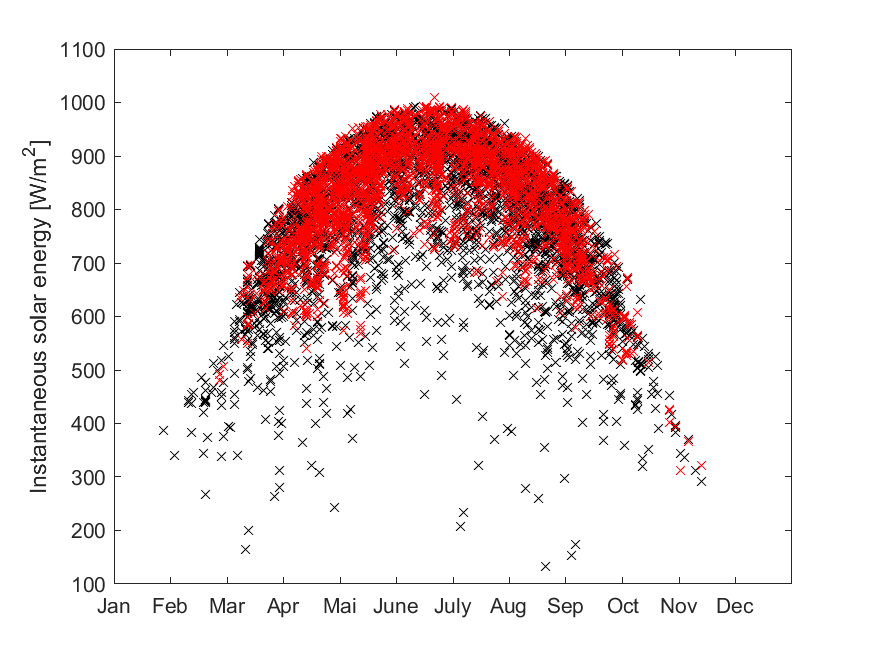 As in the previous section, the chart below shows the cumulative solar energy received from sunrise to the cross country start time, versus the date for the entire flight database. This time the red and black dots are quite distinct. The red dots are located below the black dots. It makes sense, since those are flights where the cross country start is carried out before the solar noon. And the interface between the black and red dots represents the cumulative energy at the zenith. What is much more interesting to notice is that the vast majority of flights are above the blue line of the 1kWh, and that only a few flights are around or below this mark. This is an interesting mark that can be used to refine the time of arrival on site. It may also be noted that the months of April, May, September and October are suitable for early take-off. And conversely for the months of June and July where no flights appear in the vicinity of the 1kWh mark. 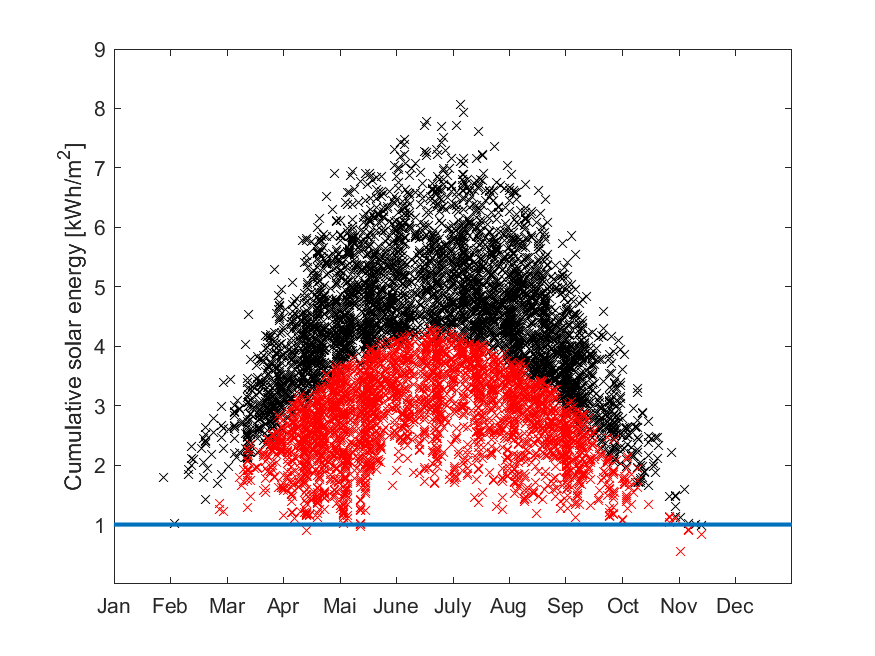 Time in Paris at 1kWh of cumulated solar energy

From the result of the previous section, we can calculate the time in a defined place at which the 1 kWh of cumulated solar energy is reached. This time will then be an interesting data to know for flatland cross country flights : it will help to choose the best take-off time. As an example, the chart below represents this time every day of the year for Paris. 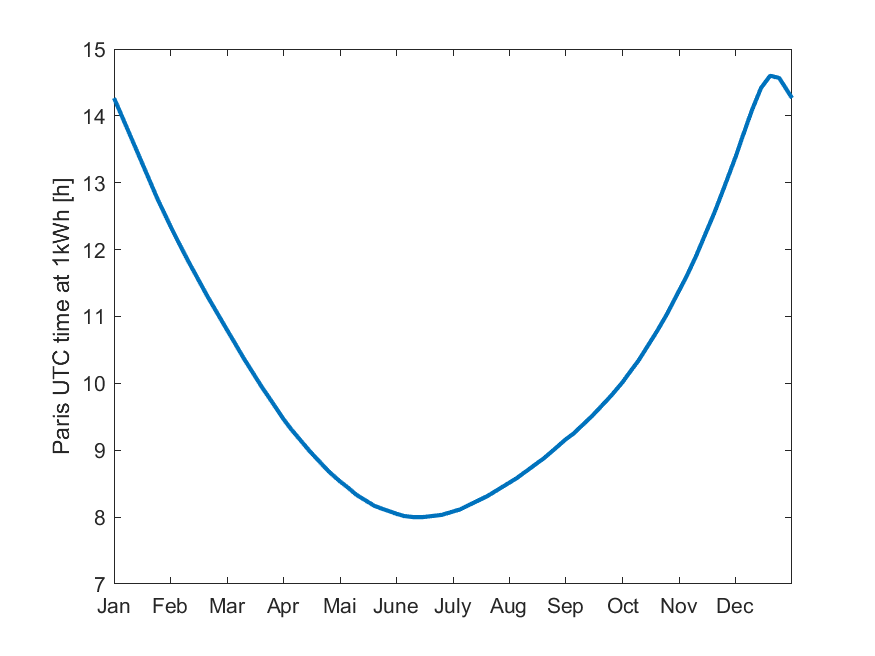 From the CFD database, we were able to observe that the minimum extraction solar energy is around 1 kWh. This data is interesting since, converted into UTC time, and then to local time, it gives a reference to choose your arrival time at takeoff, to prepare for cross country flying. This reference is to be adapted according to the quality of the air mass and the cloud cover.

A similar study on the flatlands, but with a different geographical area (in particular at a different latitude) could show if the rule of cumulative energy at 1kWh remains valid. The main difficulty lies in the possibility of having enough valid tracklogs in the area.

Stay connected: those prospects can be the subject of other articles in the XC Lab!